The Cat Headbutt: What Does It Imply, and Why Do Cats Do It?

I don’t know about you, but one of my favorite feline gestures is the cat headbutt. My own cat, Tara, headbutts me constantly when she’s sitting on top of me, and half the time she knocks my glasses off my face when she does it. I don’t mind the temporary inconvenience, because I know what the cat headbutt means.

The cat headbutt is not when cats stick their heads into another cat’s butt, although that could be another amusing definition. When a cat headbutts, she taps her head against you and rubs her cheeks along whatever body part she’s near. Cats also headbutt objects like walls, chairs and furniture.

What does cat headbutting mean?

Cats have scent glands all over their bodies, and they use them to leave marks on objects, including you. According to cat behaviorist Pam Johnson-Bennett, cat headbutting is typically used for bonding and social purposes. “For the cat to place his face so close to yours and engage in this bonding behavior is quite an act of trust,” she says. Johnson-Bennett also explains that this behavior is more properly called cat bunting.

People often inaccurately think that the cat headbutt is just a means of marking territory, but it’s a lot more than that. Scent communication is complex, and while cats do use scent to mark their territory, cat bunting can also be used to create familiarity and show respect.

Johnson-Bennett also says that cat headbutting may be attention-seeking behavior, particularly if your cat butts his head against you and then tucks it down or turns it to the side.

Do cats headbutt other cats as well as people?

Yes. In fact, you’ll often see feline friends rub one another with their heads. Not only does it create the “colony scent,” it helps with bonding as well. It’s a measure of deep trust for another cat to put her head so close to one of her feline companions. So, if you see your cat headbutt another cat, know that it means that they’re buddies.

Cat bunting is also seen in wild cats, so it’s something that comes to cats naturally through millennia of evolution. 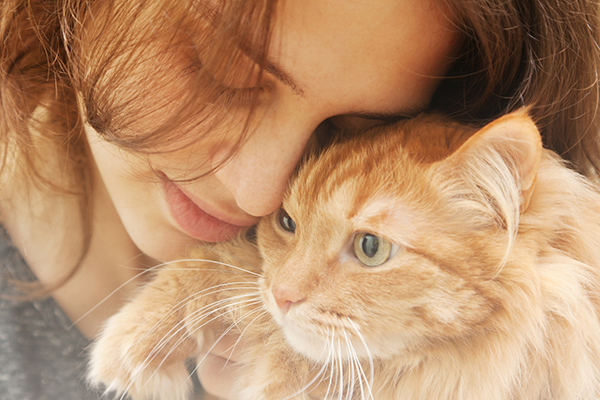 A cat headbutt is just one of the many forms of cat affection. Photography ©Olezzo | Thinkstock.

Why do some cats headbutt and others don’t?

Every cat is different, so don’t worry if your cat doesn’t headbutt you or her fellow felines. There’s a lot of variation in the frequency and intensity of the cat headbutt. And there are tons of other ways that cats show affection.

Head pressing is when a cat presses her head against a wall or a piece of furniture relentlessly. Often accompanied by abnormal vocalization or other odd behaviors like circling and disorientation, cat head pressing is a manifestation of a neurological disorder. “Specifically, head pressing and the symptoms that go along with it usually are caused by problems with the central nervous system,” writes Dr. Eric Barchas. “In other words, head pressing occurs when something goes wrong with the brain.”

Read Next: Why Do Cats Lick You? 7 Reasons